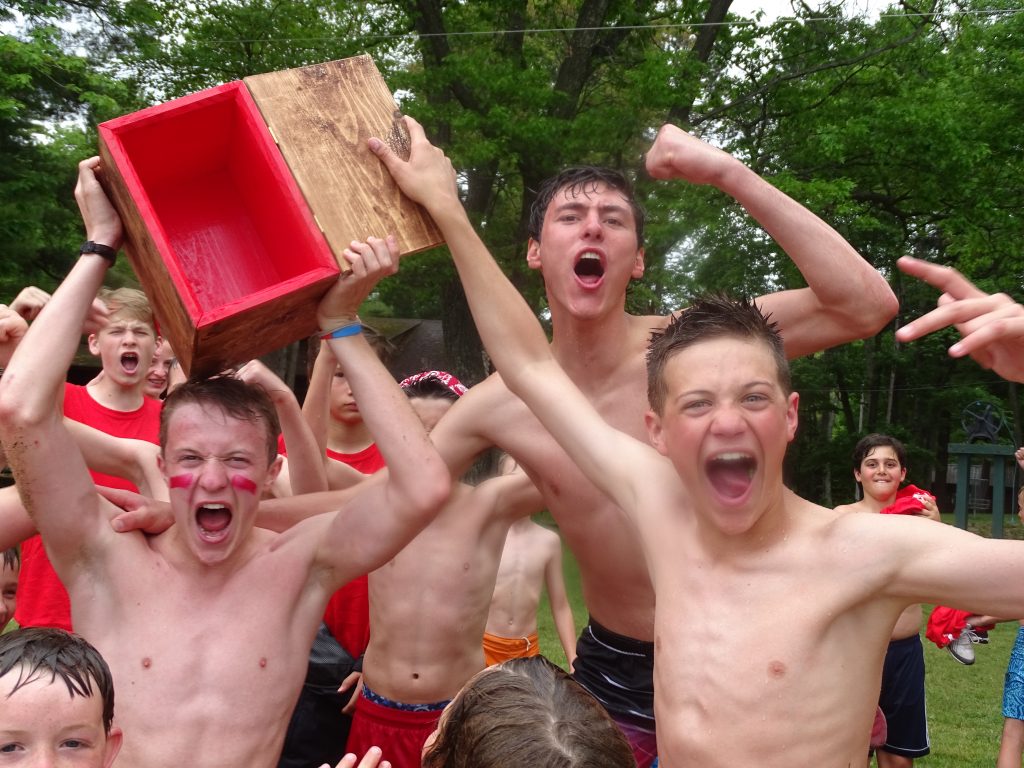 We love welcoming new campers into the Deerhorn Family. We do our very best to ensure their transition into camp is a smooth one. But those first days of camp, it can be a little overwhelming, especially when people around you are using words you’ve never heard before. It doesn’t take long before you know all the lingo too…but we thought we’d get you started with a few words, so you can learn how to “Speak Deerhorn” too!

AC-Assistant Counselor- In order to be a counselor at Deerhorn, you have to be at least 19 or have a year of college. Assistant counselors are 16-18 and spend half their time helping in activities and the other half working in the kitchen. They live in koogees with a counselor and the younger campers. 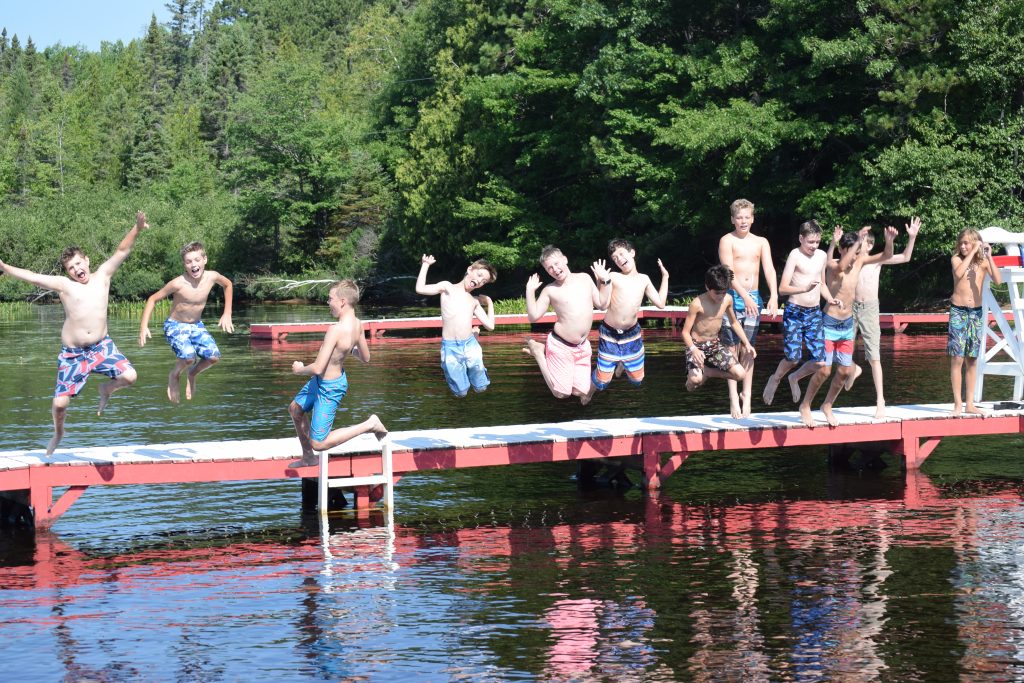 A-Dock-Our main dock down at the waterfront, inside which our campers swim. It is shaped like the letter A.

Big Green– Our very old pick up truck that has been around since the 1960s. It’s only purpose is to move baggage on opening and closing day.

Biking/Crafts-These two activities are together, and campers will check in at biking before deciding if they want to go mountain biking or do crafts that day. 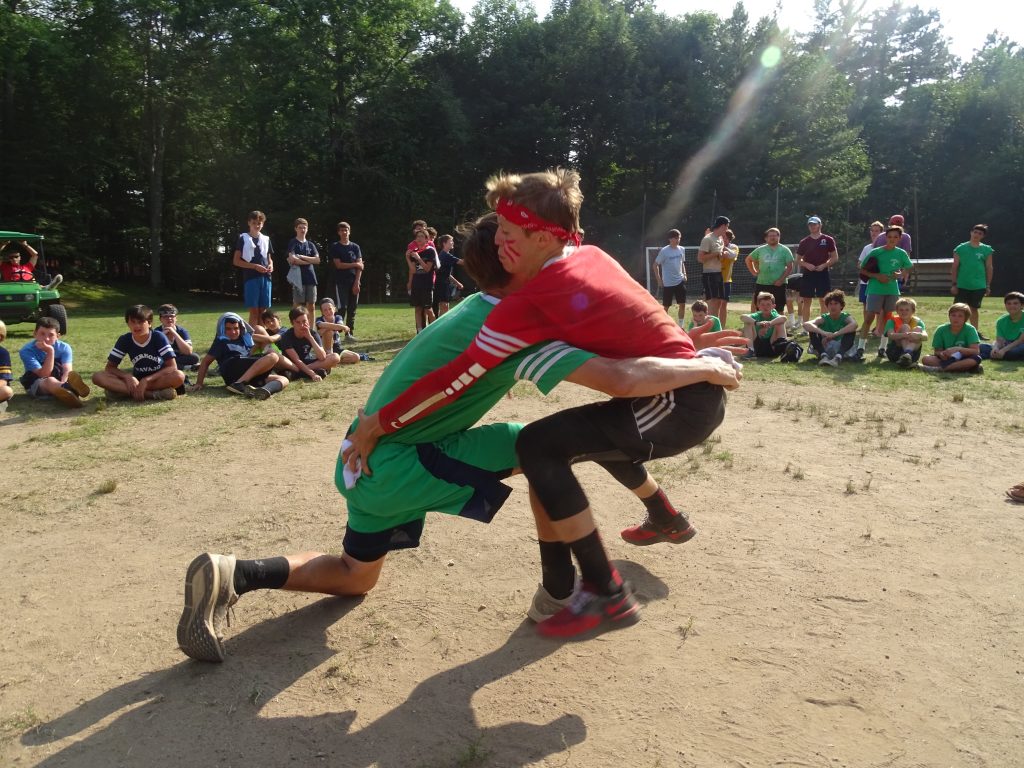 Braveheart– Everyone’s favorite game at Deerhorn. Four teams compete on the soccer field to try to pull the flags of the other three teams before everyone on their team gets pulled. Last team standing wins.

Creed– The Deerhorn Creed was written in 1930 by our founder, Dr. Don. We talk about the Creed on a daily basis, and what it means to “live the Creed.” It’s the foundation upon which is built everything we do at camp, including kindness, strength, and cooperation.  You can read our Creed HERE. 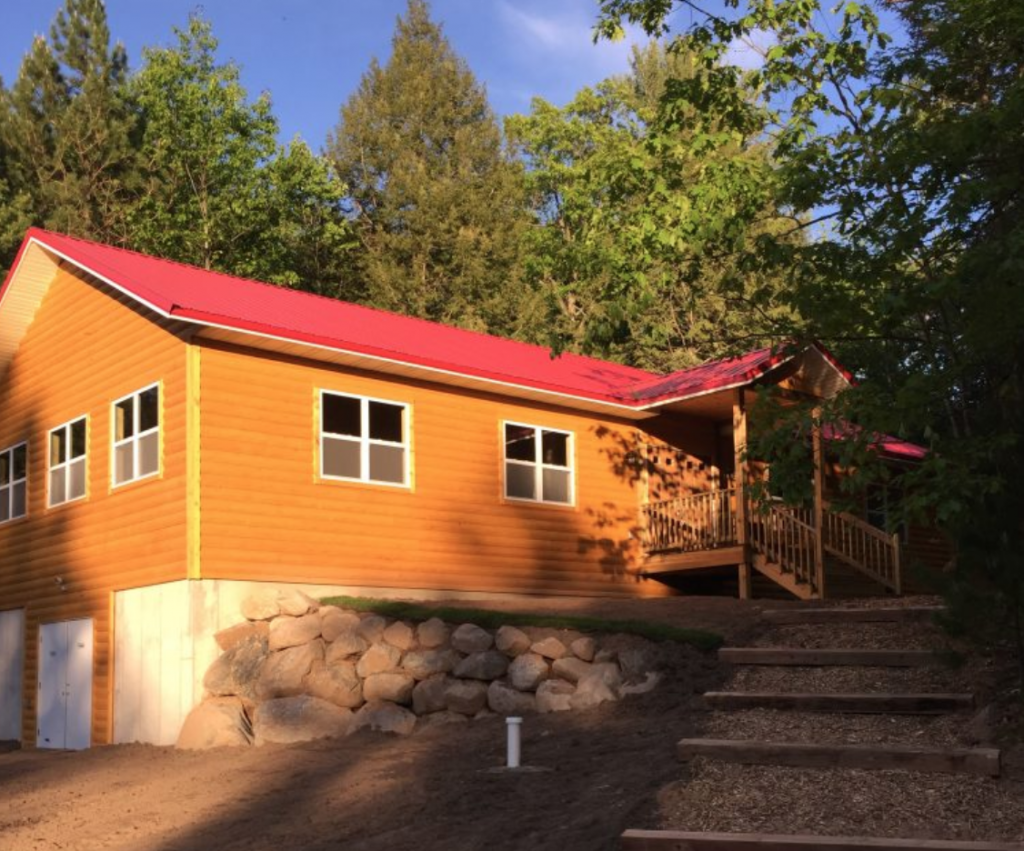 Deerhorn Hall– A song about the brotherhood of Deerhorn that has been sung for decades. As of 2018, it’s also the name of our brand new rec hall, located on the soccer field.

DK Field– Our baseball field, which, in 2006 was named after Dick Kinney, a Deerhorn legend, who has worked at camp for over 30 years.

General Swim-Our free swim period from 5:00-5:30 every day. We have lifeguards supervising while kids can swim, go down the slide, or go out to the Rave.

Hobie– The Hobie Cat sailboat, which campers love to go sailing on with their friends and staff.

Horse and Goggle– A game that is a random method for determining a variety of things, including who gets an extra dessert after dinner. Everyone puts down 0-5 fingers on their hand, and all the fingers are counted up. Then the total number is counted around the table until it lands on the winner. “Eins, zwei, drei, Horse & Goggle!”

Huck– To throw something. Ultimate Frisbee at Deerhorn is often called Hucka Freya. Don’t ask us why. 😉 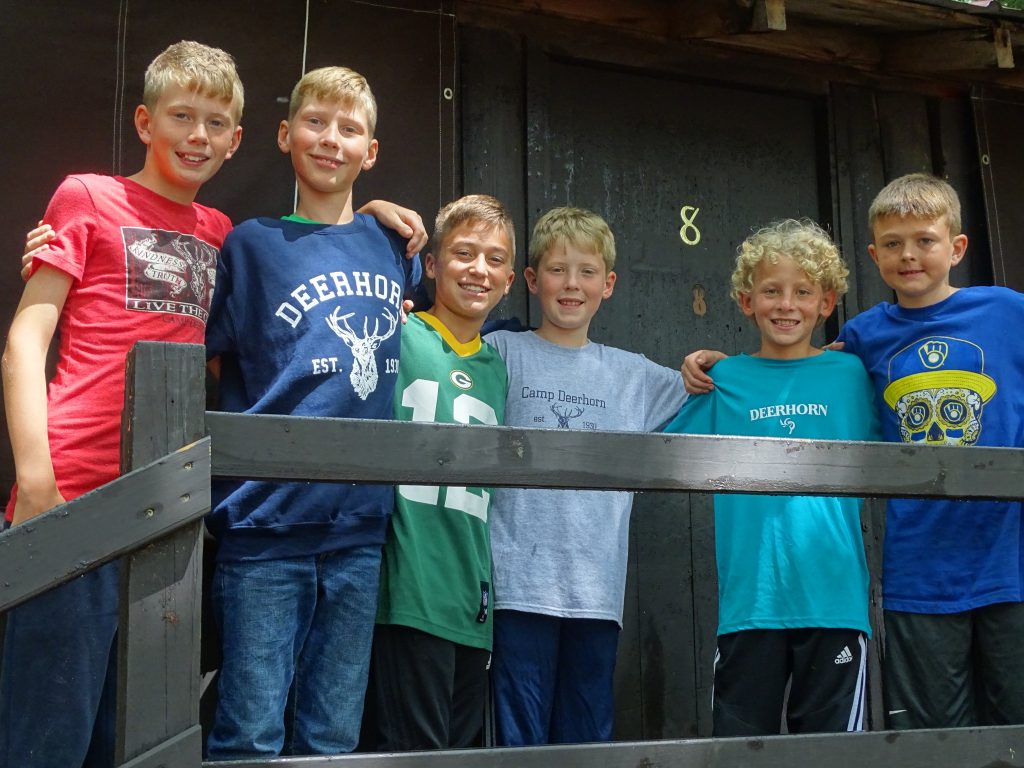 Koogee– This is our word for cabin. Legend has it that koogee is an old Native American word for cabin, but either way, our cabins have been koogees since 1930. We have 21 koogees up and down our lakeshore, and we call that area “Koogee Row.” You can see our koogees when you take an aerial tour of camp HERE.

Koogee Ball– A team game played on the roof of koogee 7. The tennis ball is tossed onto the roof and the other team has to catch it as it rolls off and toss it back up. 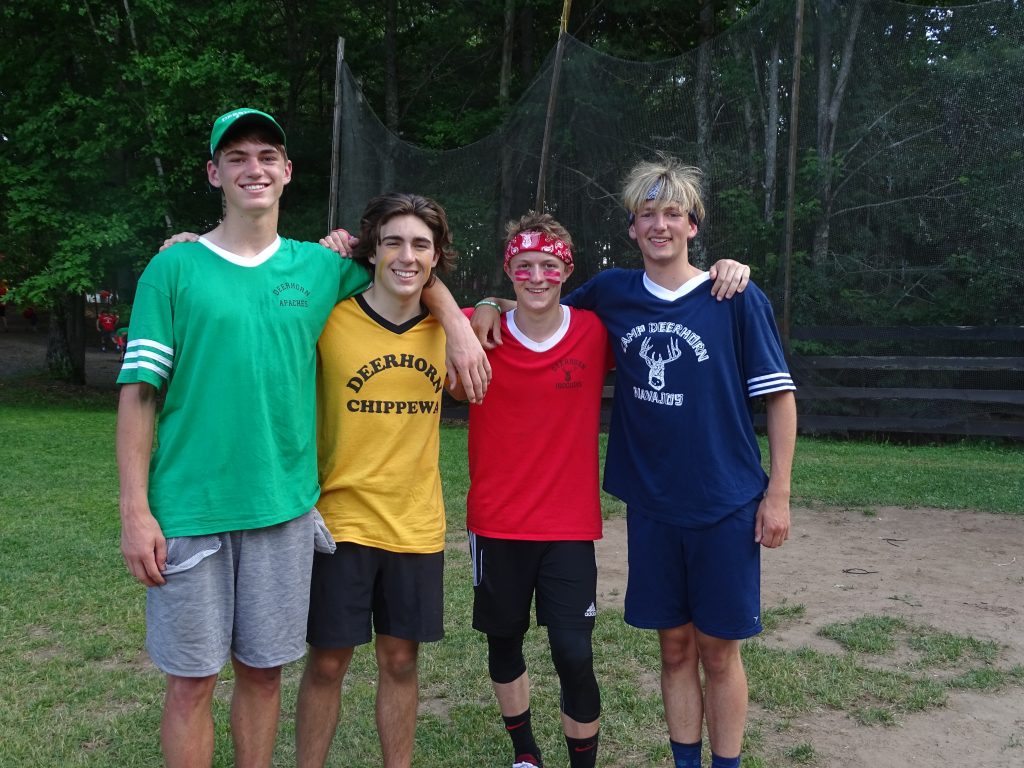 Leaders- Four 16 year olds chosen every summer to lead the four camp teams. They are chosen because of their loyalty to camp, demonstrated leadership ability, as well as their kindness and compassion.

Lodge- Built in 1932, it is the heart of Camp Deerhorn. Half is our kitchen and our dining room, where we gather to eat each meal. The other half has a big stone fireplace and is a great place for campers and staff to gather. You can find more about our facilities HERE.

Milkline- At 8:15 every night except Sunday, campers gather on the lower basketball court with their koogee for milkline. They go into the lodge to get a graham cracker and milk, and sit and talk with their koogee. It’s a time to settle down from a busy day and get ready for bed. 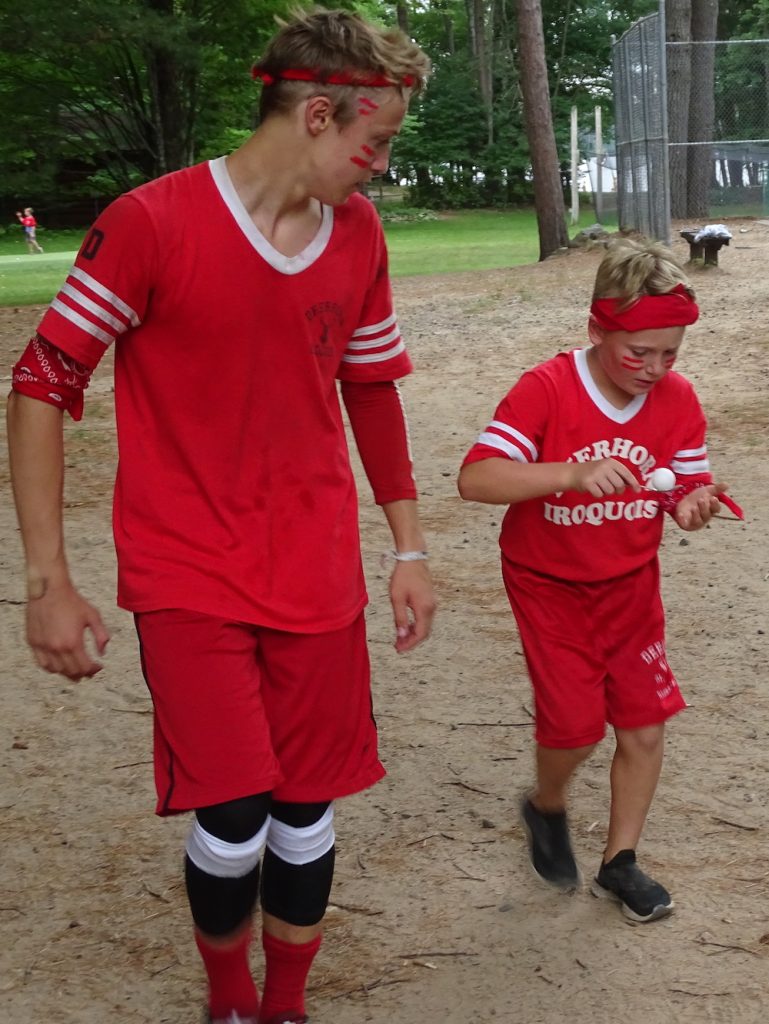 Monkey Relays– The biggest Sunday team event of the summer! The Monkeys have been happening at Deerhorn since 1930. They involve every activity in camp, and teammates must carry a ping pong ball in a spoon between activities. The event culminates on the beach when the Leaders have to try to build a sandcastle over an arrow that has been buried in the sand.

Navajo, Apache, Chippewa, Iroquois– These are the four camp teams. After campers arrive, the leaders choose their teams in a secret draft. Campers love participating in team competitions every night, as well as Sunday afternoons. At the end of the session, a common joke is saying that the team that won is the Navapachechippequois.

OD-Officer of the Day-Two counselors are assigned to be ODs each day. They supervise koogee row during rest hour as well as after lights out.

Pioneer-One of our leadership programs for 15 year olds. Campers attend for B & C sessions, and the program highlight is an 8 day backpacking expedition. You can find out more about Voyager and Pioneer HERE.

Privy– The bathroom located between tennis and crafts

Rafter Ball– A game that has been around Deerhorn for decades. It is played in the lodge, where there are two large rafters that span the room. It is a two player game, and players try to throw a tennis ball over the first rafter, but hit the second, in order to score points. 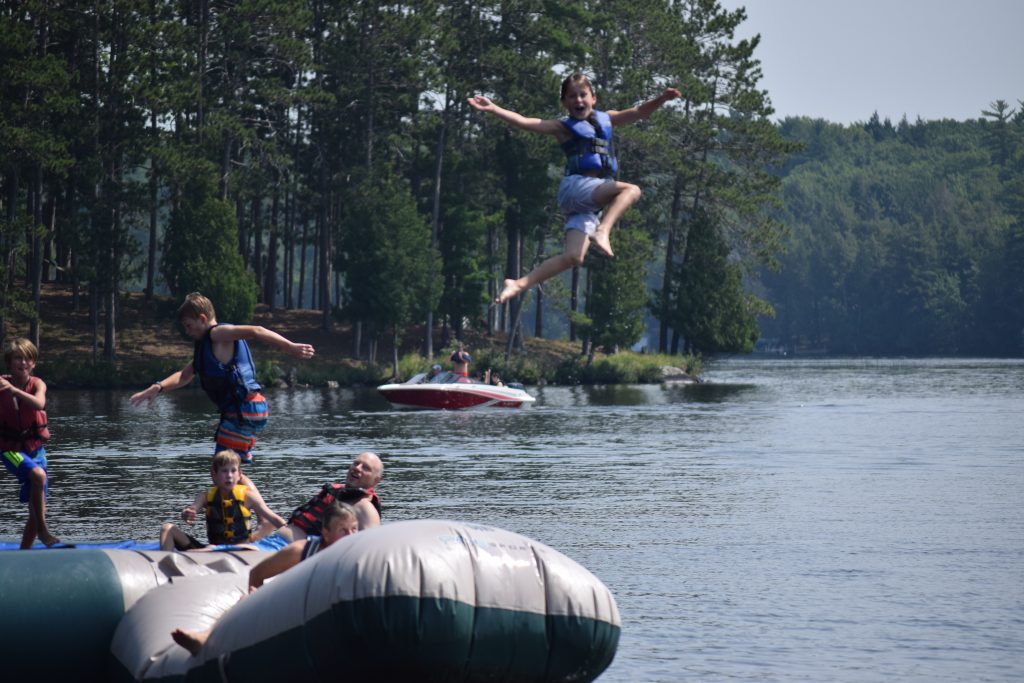 Rave-Our 20 foot water trampoline. It is a long time camper-favorite, and campers enjoying getting “launched” off the “blob” by a counselor or older camper.

Rindercella– A campfire poem that has been around for many decades. Blaine tells it these days at campfires, and it’s the story of Cinderella told in a hilarious new way. 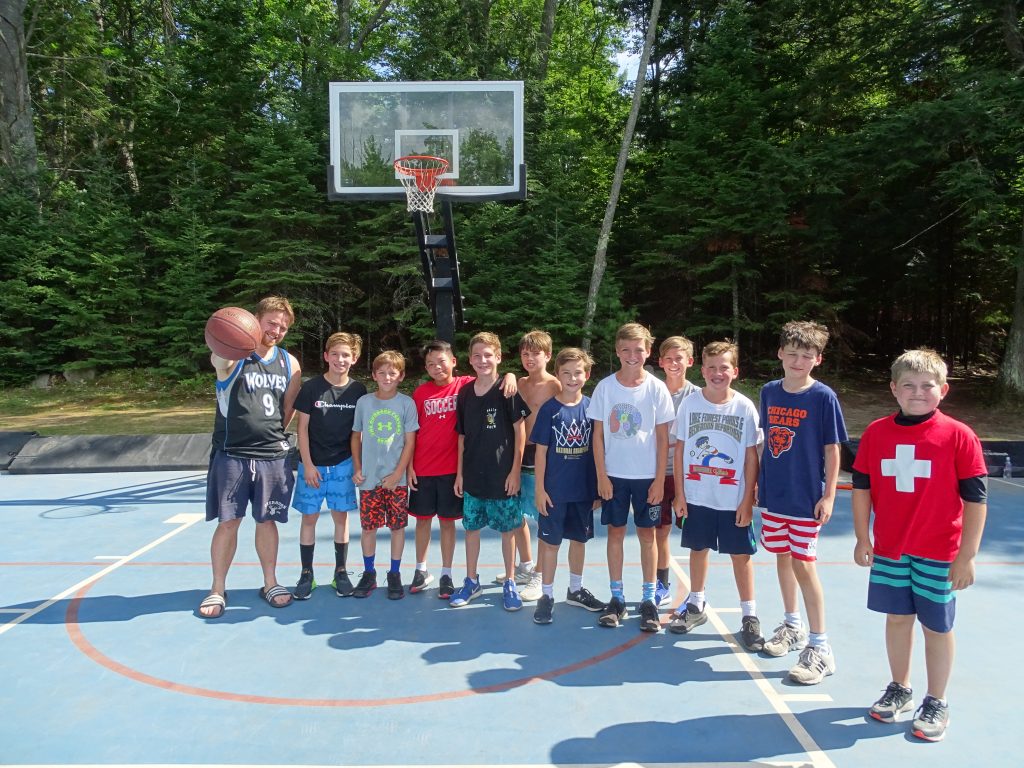 Skeeter- Don, Blaine, and Patrick’s mom, Cynthia, was nicknamed Skeeter. Several years after she passed away, we built our upper basketball court and inline skating facility, and named it The Skeeter in her memory. You’ll find the Skeeter on the hill at the top of the soccer field, and it’s home to basketball class as well as Sunday morning street hockey games.

Spike Bucks-Our affectionate name for our one week campers, our E session boys.

Sports & Games-Years ago, our Baseball/Soccer activity changed to Sports & Games, where kids play traditional activities such as football and soccer, but also play lots of imaginative games that our counselors have made up over the years. Two favorites are Klepton and Quidditch.

Sprout Ball– One of our versions of dodgeball. There is a circle on the golf green in which sprout ball is played. When you get out, you have to sit down until the person who got you out gets out themselves…then you’re back in! This game is played for hours during Father Son camp and is a camp favorite as well.

Team Comp-Team Competition- Most evenings team members will compete in sports like basketball and soccer, while Sunday afternoons are spent in an all-camp team event. Learn more about our leaders and team competition HERE.

Voyager– One of our leadership programs for 15 year olds. Campers attend camp for B & C session and the program culminates with an 8 day sea kayaking expedition. 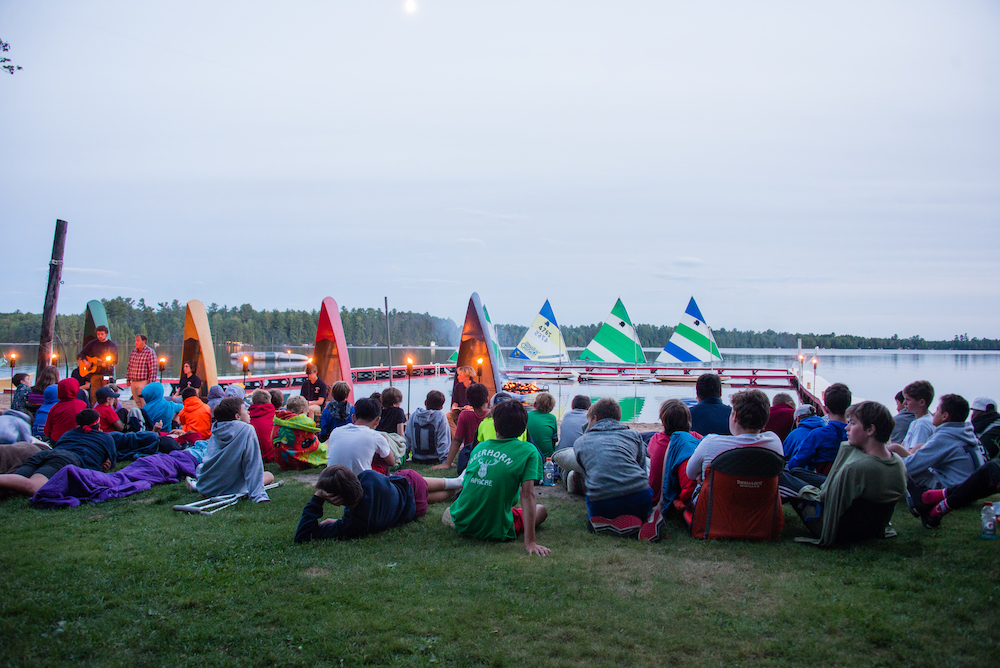 Water Campfire-a ceremony held at the end of the summer, honoring the four camp leaders. A fire is lit in the water (on a metal bunk bed) and four half canoes are positioned on the beach. Each leader has someone give a short speech about them, they give one of their own, and someone sings a song of their choice. It is a beautiful evening that reminds us all of our love of Deerhorn.

Words of Wisdom-A short (non-denominational) Sunday morning talk given by one of our staff about something that has made a difference in their life.