The Power of Empathy

The Power of Empathy

This past year has been hard on the Deerhorn Family.  We lost Rooster, and then Derek, and in November we lost Gabe. And now Andrew. All of those things left me feeling cracked wide open. I felt deeply their losses, not only for myself, but for their parents and families, and the Deerhorn Family, especially the kids for whom this might be the first loss in their young lives.  It’s easy to get lost in that kind of sadness.  At Andrew’s visitation last week, watching a 10 year-old camper pay his respects to Andrew’s family made my heart break and swell with pride at the same time. Pride that Andrew had meant so much to this camper, and pride that this 10 year-old was brave enough to enter into his family’s sadness. As I watched the Deerhorn Family come together to support each other and celebrate lives well-lived, I was reminded again of the importance of empathy. 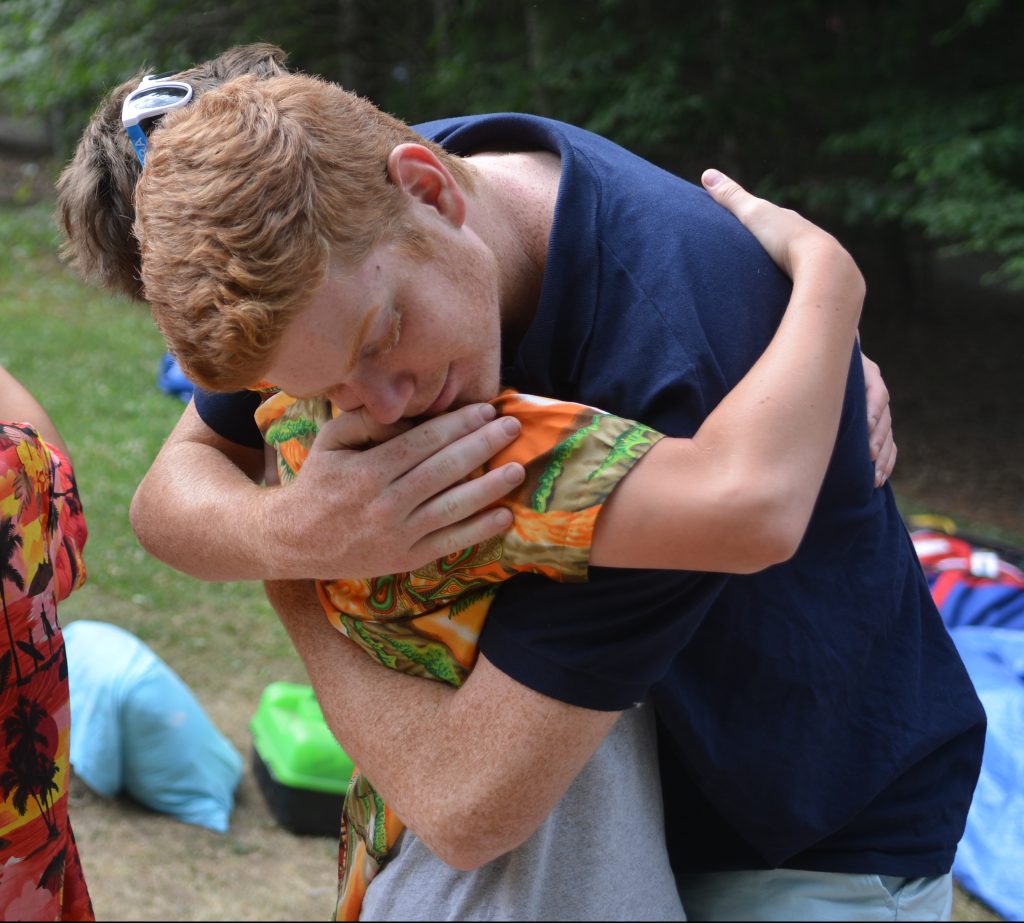 Empathy is the ability to step into the shoes of another person, and try to understand how they are feeling, and use that knowledge to guide our actions. It’s not as simple as sympathy,  just feeling sorry for someone. Sympathy is less risky. It’s looking in from the outside. Empathy is entering in.  Empathy is much deeper and more complex, and it’s scary to willingly enter into the suffering of someone else, to feel what they are feeling. I listen to a podcast called “Everything Happens” by author Kate Bowler. One of the podcasts was called “There’s No Good Card for That,” and she interviewed Emily McDowell. They talked about how often when people are going through illness or grief, we don’t know what to say, so we don’t say anything. Or we say the wrong things, like starting with “At least…” During a time of grief, there is no helpful statement that starts with, “At least…”  Emily McDowell has an incredible website of greeting cards, including an entire collection of empathy cards like the ones below. 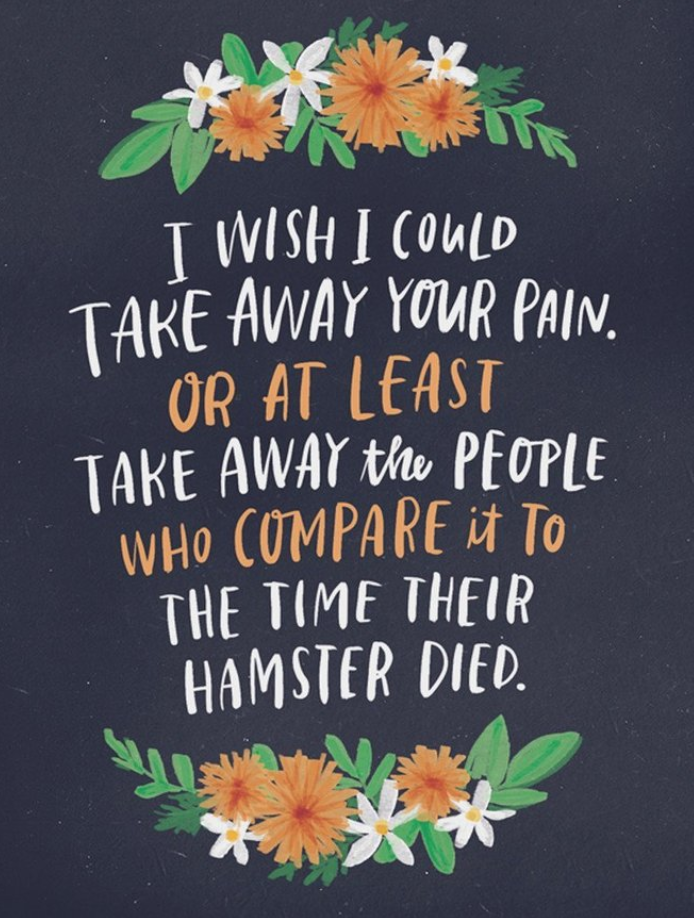 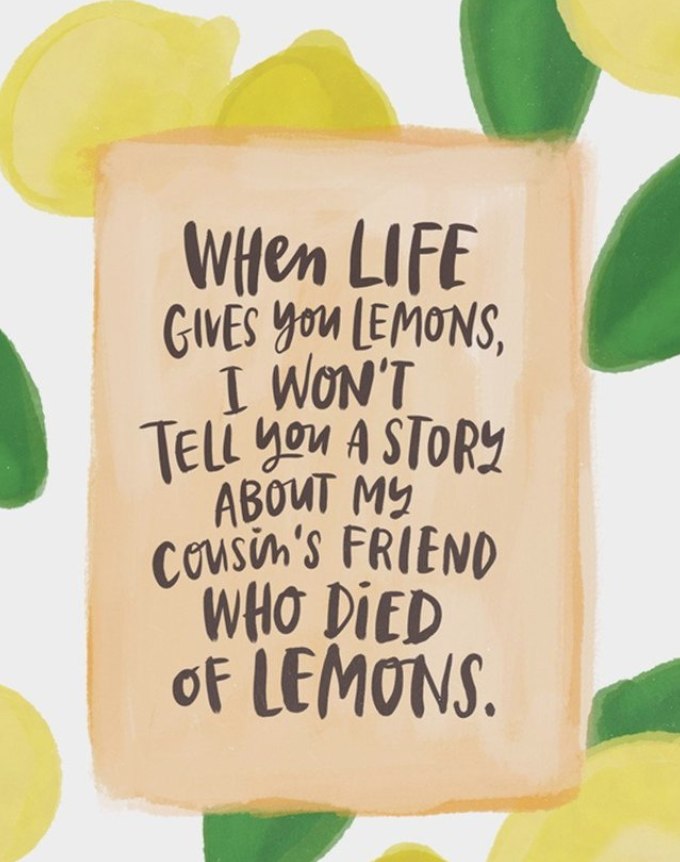 After our daughter was born, in 2009, there was a long period of time when I stopped sleeping. Days of not sleeping turned into weeks, and it was several months before we got it all straightened out, and it’s a beast that has reared its ugly head several times since. That was a tough spring and summer, trying to hold it all together, do my job, and not bite people’s heads off along the way. There were times when I thought I should probably just wear a shirt all the time that said, “Please be patient with me. I haven’t slept in weeks.” I wanted people to know that I wasn’t myself, that I was going through something hard. That this wasn’t who I was. I tried so hard to be patient and kind through it all, but I know I didn’t always succeed. 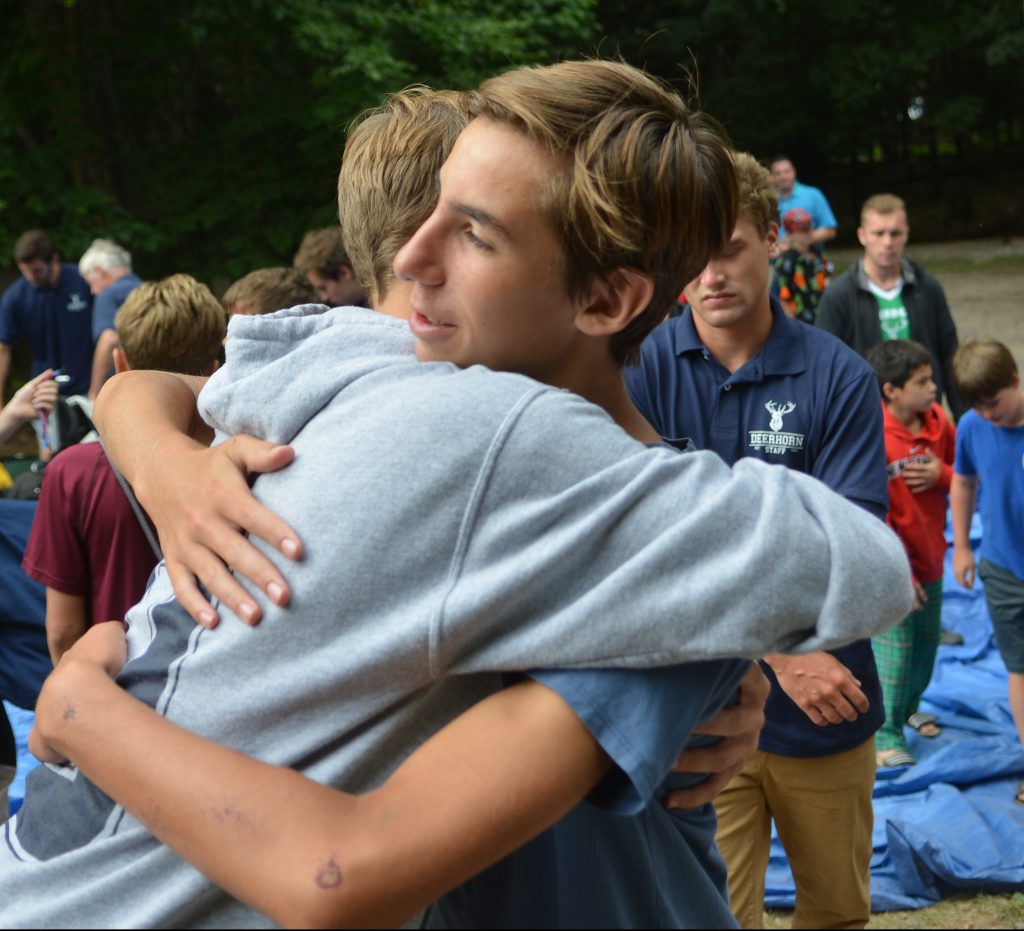 Fast forward two years to when I was diagnosed with breast cancer. It wasn’t long before the chemo made all my hair fall out. And suddenly, I didn’t need to wear a t-shirt. That decision was taken from me.  There was my bald head, broadcasting to the world, “I have cancer.” I didn’t have a choice of whether or not I wanted to share my story with the world. It was there for all to see. Two of the hardest journeys in my life were very different experiences. In one, the world could see my Hard. In the other, it was only those closest to me who knew my battle. It made me realize the truth of the quote that says: 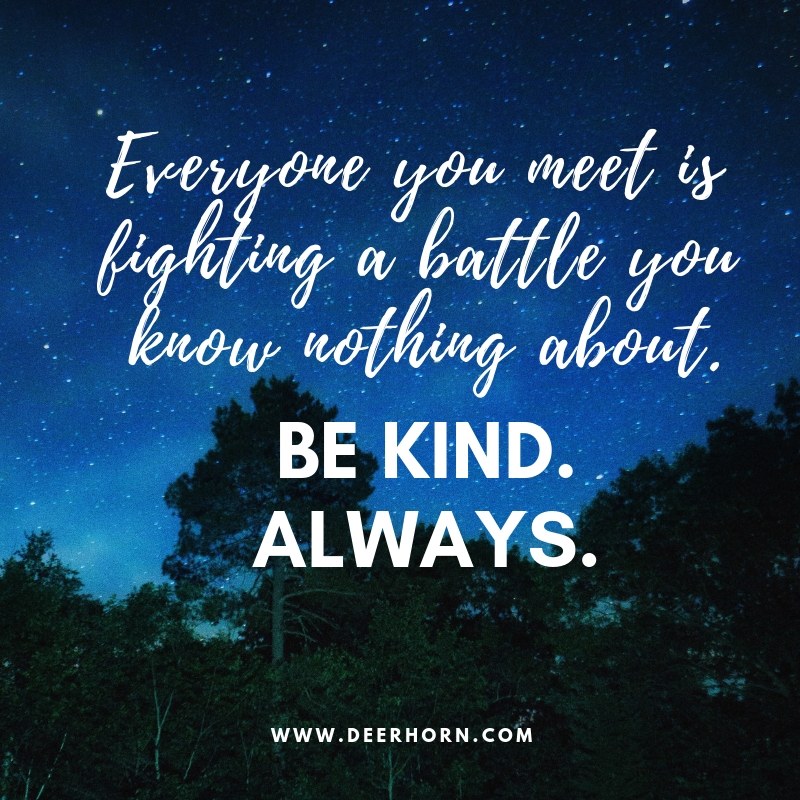 We all have battles in our lives. Some are huge and overwhelming and some are smaller, but just as exhausting. It’s so easy for us to judge people by their actions, but most of the time we have no idea the truth of their life. Most battles that people are facing are not visible to the naked eye.  Maybe we would be able to treat people more gently if we just knew their story. And going through hard times of our own can make us more empathetic people, if we let it. Psychologists call it “post-traumatic growth.” We would never choose to endure difficult times, but those times can help us to better understand others. We know what pain or grief or fear feels like, and maybe then we can stop and consider others’ pain as well, even if it is not immediately obvious. 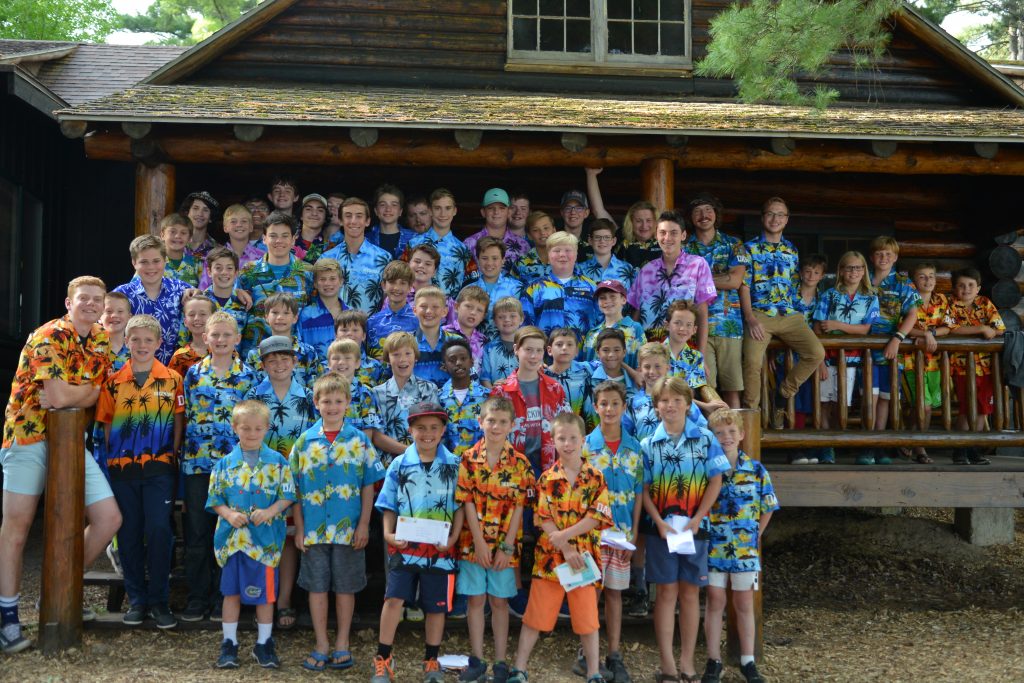 I just finished Michelle Obama’s book, “Becoming.” She talked about how hard it was on the campaign trail, hearing things that were said about her online. But she wrote there were so many times when she would meet some of those people face to face, and that it was harder for those people to hate her once they met her. “It’s easier to hate from a distance.” With the huge social  media presence in our lives, it IS easier to hate from a distance. We need to teach our kids the importance of getting to know people and hearing their perspective, being willing to listen to their story.

She also talks about all the times when she had to meet with survivors of gun violence, or with parents who had lost children…over and over again, sitting and grieving with people who had suffered horrible loss. She says, “I’d tried always to bring the most calm and open part of myself to these meetings, to lend my own strength by being caring and present, sitting quietly on the riverbed of other people’s pain.” 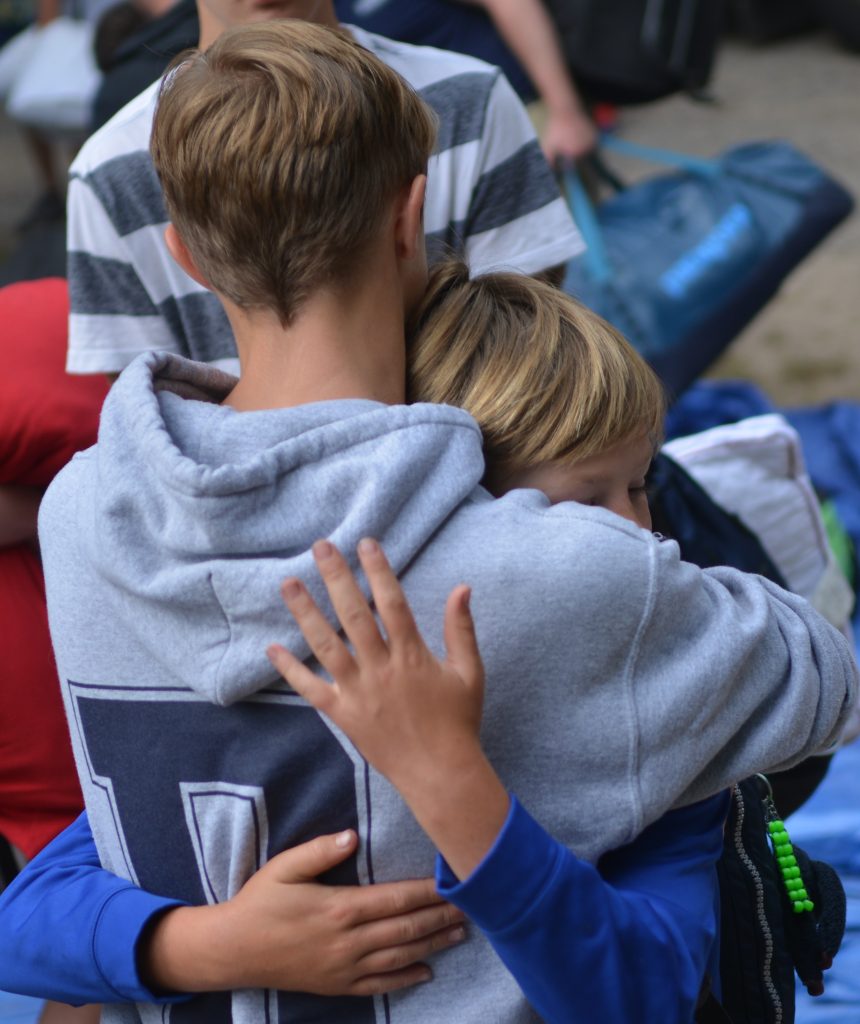 Sitting quietly on the riverbed of other people’s pain. That is empathy. And empathy isn’t easy. It’s not trying to fix it. It’s simply being there, and being able to say “This is so hard. I am so sorry you are going through this.” The more I watch the news, the more I am struck by the need for empathy in our future leaders. Not billionaires who think furloughed workers should take out a loan to buy groceries for their family. Not politicians who offer “thoughts and prayers” every time another mass shooting happens. We need leaders who can put themselves in someone else’s shoes, and really take into consideration what their life is like, and the obstacles they are facing. Leaders who can hear and understand perspectives other than their own. These are the leaders we are growing at camp. I have watched our campers and staff respond with empathy, as they show up to support a family at a funeral after a devastating loss. As they sit with a homesick camper and say, “I was homesick my first year too. It’s so hard.” As they sit down with kids in their koogee who are arguing, trying to get each to understand the other’s perspective. As they cry with each other on the last day of camp, willing to be vulnerable and sad in front of their peers, and share in the sadness of leaving. And as they show up for each other during life’s Hard, long after they have left Camp Deerhorn. Empathy is magical, and powerful, and necessary to teach our children. It is first and foremost communicating the message of, “You are not alone.” 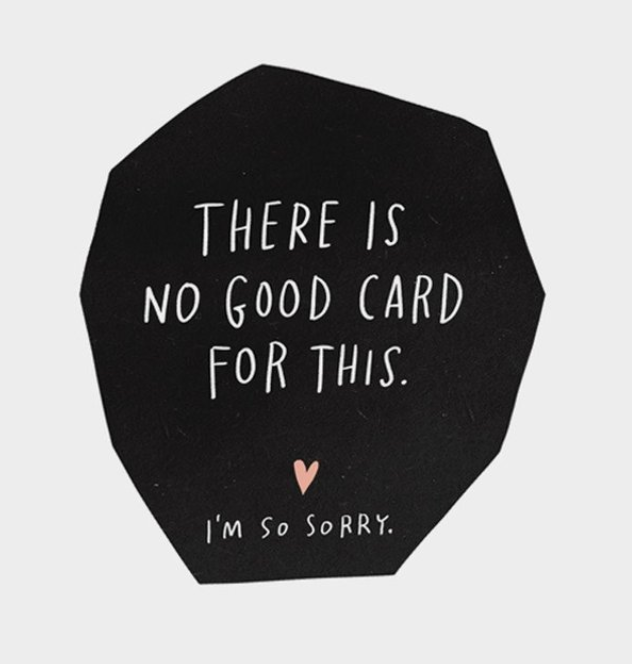 One thought on “The Power of Empathy”

Such a beautiful piece. Thank you.